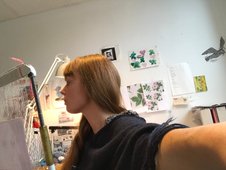 First of all I work with tapestries and textiles. Often, my tapestries are kept in the weavingframe of steel and placed freestanding on the floor when exhibited, this to point out the workprocess and history that lies behind the work. Tapestries have a history of storytelling made up by sequences, such as comics are built up today. Tapestry is also sequentially through the weaving technique, where weft thread goes in one direction and is built sequence by sequence.

For me tapestry is linked to the 1970`s and the fight for equal rights for men and women. This has been important in my choosing of the tapestry as my medium. I love the way I can get several layers of meaning in my works because of this, and also by using the popular culture we are surrounded by as motifs. The fast becomes slow in the tapestry- because of the time it took to build it up.

I try to focus  on gender, aftermaths of trauma, and relational balances of power in my works. Now, 2021, I am working on a large project on women in literature, in the voice of some favourite male authors.

At Tøyen Deichman, I did this  workshop in weaving, for children, in cartoonlike colors and shapes: 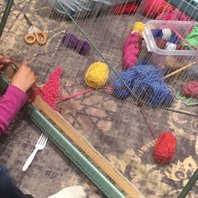 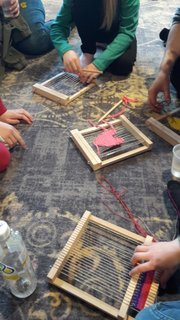 I got my first book to write in from my grandma Randi when I was nine. I wrote and drew my whole youth through. Somewhere on the road from there I became a secret writer. The place I was this, a gerilja-writer, was in Trøndelag where I grew up. My family moved there when I was five years old, we lived for many years with this: a pottery. I made small busts of clay, loved to sew, draw faces, and wrote alot- also letters around the world:). This place where I grew up was surrounded by sea, open fields, and open doors.

So I have been writing under pseudonyms/alters or anonymously from I was very young. On the two photoes above: I have them here because I want to show I wrote with love for places and the people in them.

From I was thirteen I have had a passion for music and songlyrics.  There too I have had my secret ways of bringing them to life. Six-teen was my age the first time my lyrics were in use. Back then being creative was something mostly embraced.

I still write. My texts vary from song/poplyrics and scripts to textcollages. I include my lyrics in my artproject. Some of my writings and thoughts are published on this website under lyrics, as this page was my online publishing-project: u.t.t.e.r.a.n.c.e.s : e.g my short texts, pamflets and lyrics on life events and aftermaths. This year, 2022, I still write poems, but I dont publish them often- and I dont want them be in use, but I would if you let me be with my name in your project.

I also write about love, pets and nature, and sometimes people that stand out by their choices.

I like the small and strange and melancollic,  in lyrics, music and in life.

Though randomly writing and sending and still being a textninja, I dont send(email..) lyrics away anymore, as I once did.

On the use of pseudonyms Id not recommend that to anyone, though doing this would leave you without much fuzz, but anonymity   could give people the oppurtunity to exploit you. Its sad but true.

I am also teaching weaving, sewing, making and re-use of textiles. Since 2018 I have worked as a teacher in workshops for youth and children alongside my own projects. Future friendly teaching is with a thought to environment, and social change.

Please see these videos in re-use of curtains and table cloths, and redesign of jeans, that was made for Relove by me and my colleague:

Make a Maiflower this spring! In this Maiflower  below that I made with Relove, I didnt buy anything- its made of torn or used clothes and textiles.

One of my projects this day 2022 is weavings of appropriated material, linked to care, and the couple, as a theme. I make use of spelsau-wool, thicker wool as angora and mohair, and I also do my best to use more worn out clothes and textiles in my works- for the climate.

Alongside this I write lyrics with thought on future songs, and I write prosa. I have finished several projects on pamflets, written by me on muses & music, and with references to music, in 2015- 2016. My pamflets were published here on my website for several years.  I lost much of my material, as written lyrics and ideas when I was young(1993 and 1999), and this happened again some years ago(2014). Stressful as this is, I try my best to carry on with my projects. Several of my pamfleths became a harselas/satire on this: thinking on where my lyrics could have gone.

en til deg, til deg og til deg.

ON BIRDS AND ANIMALS

Over several years  I have worked with the horror of the unexpected as a theme in tapestry.

In an extension of this, I have tried out to weave small and large birds and animals, and thought of them as a place where children potentially could try out their own stories about being little /big/ in or without power

I have also been working on the comic-novel-project Immersed in Another World.   It received funding from Kunstløftet.

The comic Imprint, is on becoming distant when having triggers. A trigger is a reminder, almost as an imprint, in self and feelings, that makes you lose yourself for a second. I first learnt about this frozen way of staring of a psychologist that worked with refugees. Frozen gazes is a normal and healthy state when driving a bus or doing something you often do. As a post trauma reaction this distant glare is not dangerous or harmfull. Its just a brain pausing in the middle of everything.

^From Her point of View/

my tapestries in row,

on on oh its on

being small vs big, or strong,

but, before I go,

to claim I am leaving

when I came as

myself, artist and mum,

then to take her little hand,

earlier they had gathered, twenty dark youngsters at Walthamstow Central,

this is evacuating alarm,

the gallery and me

that everything was fine,

and the riot disappeared,

waking up without sleep,

they shrieked past my window all night,

built on the old,

so then I listened to the

I did pretend to be them,

them with the talk,

till our flight was

and I rebooked and

Wave then to this,

as I once did,

oh Dear Yorke, this is,

why do we do this work,

* I used to have names.  And I used to be proud of them. So this

lyric is written with a